The Customers in the Cafe

“The kingdom of heaven is like a landowner who went out at dawn to hire laborers for his vineyard. 2 After agreeing with them for the usual daily wage, he sent them into his vineyard. 3 Going out about nine o’clock, he saw others standing idle in the marketplace, 4 [b]and he said to them, ‘You too go into my vineyard, and I will give you what is just.’ 5 So they went off. [And] he went out again around noon, and around three o’clock, and did likewise. 6 Going out about five o’clock, he found others standing around, and said to them, ‘Why do you stand here idle all day?’ 7 They answered, ‘Because no one has hired us.’ He said to them, ‘You too go into my vineyard.’ 8 [c]When it was evening the owner of the vineyard said to his foreman, ‘Summon the laborers and give them their pay, beginning with the last and ending with the first.’ 9 When those who had started about five o’clock came, each received the usual daily wage. 10 So when the first came, they thought that they would receive more, but each of them also got the usual wage. 11 And on receiving it they grumbled against the landowner, 12 saying, ‘These last ones worked only one hour, and you have made them equal to us, who bore the day’s burden and the heat.’ 13 He said to one of them in reply, ‘My friend, I am not cheating you.[d]Did you not agree with me for the usual daily wage? 14 [e]Take what is yours and go. What if I wish to give this last one the same as you? 15 [Or] am I not free to do as I wish with my own money? Are you envious because I am generous?’ 16 [f]Thus, the last will be first, and the first will be last.” – Matthew 20:1-16 New American Bible (Revised Edition) (NABRE)

“The Workers in the Vineyard” is a parable I struggled with for many years.

Part of me thought it wasn’t fair; people who worked longer should get paid more.

Part of me thought it was fair; the guy who owned the vineyard wasn’t cheating anyone, he was just being generous.

Of course, the theological point is that there is always time – even at the 11th hour – for salvation.  And God loves you no less because you weren’t first in line for the fullness of faith.

The parable came to mind a couple days ago when I read that a small-town café in Ohio got into trouble for acting a bit like the vineyard owner. 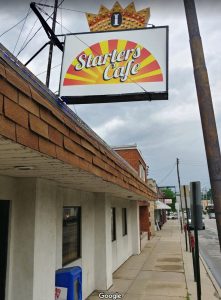 The café, Starters Café in Cheviot, Ohio, did the unthinkable – at least to the atheist activist group that threatened to sue it.  The café offered people who stopped for Sunday brunch a 10 percent discount if they showed a church bulletin to prove they attended services.

This seemed to be a good idea for a couple reasons.  First, it might in a small way encourage church attendance, or at least reward it. Second, with seven churches within a mile of the café, it might be good for business.

But the atheists cried foul, claiming the café was discriminating against people who didn’t go to church.  Of course, this is absolutely ridiculous. But the café through in the towel and the discount for pew-sitters is gone.

I’m disappointed. It isn’t as if I’m likely to ever eat at Starters, although it has good online reviews and I’ll definitely go there is I’m passing through Cheviot, Ohio.  It just seems to me that offering church goes a discount is, well, a Christian thing to do.  And it isn’t like people don’t get discounts for all sorts of things.

I went to a Loyola-Chicago basketball game earlier this year (this gives me an excuse to remind everyone that this great Chicago team made the NCAA Final Four). But more closely related to the subject at hand, if I went to a particular pizza joint after the game and showed them my ticket stub I got a discount. What about the folks who didn’t go to the game?

The Chicago White Sox are always having promotions. Usually, it is something like “the first 10,000 fans entering the stadium on Sunday will get a free genuine imitation major league headband.”  So…what about fan 10,001?

The phone company, cable company, and internet provide all give discounts to “new customers.” What about the old customer who has been loyally paying for eons?

And on a few instances, I have been the recipient of “positive discrimination.” It usually is because I am what is commonly known as a senior citizen.  I get a discount for movies, restaurants, public transportation, and my annual fishing license.

I appreciate getting a break, but I’m not sure I need or deserve it any more than someone half my age.  And I fear if the atheists hear about it we’ll all be paying full fare.