Pope on a Plane 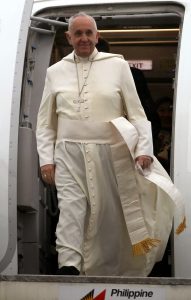 I’ve come to believe the most dangerous place on earth for Pope Francis isn’t on earth at all but more like 30,000 feet above the earth in a jet.

No, I’m not afraid the jet will crash or be hijacked.  But the Pope is on a plane with a herd of people who ponder every word, every expression, every sigh or clearing of the throat, every look of fatigue or dismay.

Yes, he has no snakes on his plane, but he does have journalists. And even journalists with a pro-Catholic tendency need to get a story.

Stories are built on conflict and controversy.  And it doesn’t take much to make a controversy, as Pope Francis learned last week when he performed a wedding in the jet high over Chile.

I’ll admit I’m a bit of a romantic and a sucker for a mushy story.  So, I thought a couple flight attendants being married by the Pope was, well, rather darling.  They were Catholic and had been married in a civil ceremony and done marriage prep to be married in the church.  But things happened and there was an earthquake, the church fell down, their lives continued and they never got around to the church wedding.

But if you are flying with the Pope, why not have him tie the knot?  And they did.

At that point, I figured they would simply go home and live happily ever after. Perhaps they will, but the Holy Father has been fielding a bit of criticism.  It goes something like this:

So…how are priests going to hold the feet of couples to the fire and make them marry in the church if the Pope does this sort of thing?  Did the Pope have proof they took marriage classes? Did they show him their license?  They obviously have not been living as brother and sister because they have children. Did they have a license?  Who does the Pope think he is?

I think the Pope thinks he is the Pope. He once got into hot water for not judging someone, but this time he got into hot water because he judged this couple ready, willing and able to have a Catholic wedding and he provided it. I still think it is rather darling.

I believe the Holy Father has a message. The message isn’t that marriage prep courses aren’t important, couples should live in sin and the rules of the faith don’t matter.

What matter most is mercy and love. As this little controversy has brewed, a particular verse from First Corinthians has been running through my mind…a verse I bet the pope knows well:

4Love is patient, love is kind and is not jealous; love does not brag and is not arrogant, 5does not act unbecomingly; it does not seek its own, is not provoked, does not take into account a wrong suffered, 6does not rejoice in unrighteousness, but rejoices with the truth; 7bears all things, believes all things, hopes all things, endures all things.

8Love never fails; but if there are gifts of prophecy, they will be done away; if there are tongues, they will cease; if there is knowledge, it will be done away. 9For we know in part and we prophesy in part; 10but when the perfect comes, the partial will be done away. 11When I was a child, I used to speak like a child, think like a child, reason like a child; when I became a man, I did away with childish things. 12For now we see in a mirror dimly, but then face to face; now I know in part, but then I will know fully just as I also have been fully known.13But now faith, hope, love, abide these three; but the greatest of these is love.