Open to the mission 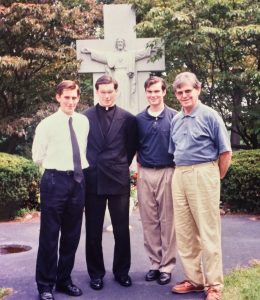 “Jesus Christ is the answer to the question that is every human life.”
– St. John Paul II

Here’s Dad with three of his sons. It was taken 20 years ago when I was about to enter the novitiate in Cheshire. Matthew, was halfway through his Legionary formation, and Andrew (my Irish twin) was doing a missionary “gap” year with the RC Mission Corps (see www.rcmissioncorps.org).

I can’t believe how fast that 20 years has gone! And it reminds me of the importance of being open to the inspirations the Holy Spirit sends us each day!