When all the World is on Your Shoulders 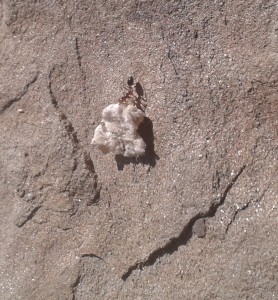 I was sitting on a chair outside one morning, praying my morning meditation, when I noticed an ant on the ground by my feet.

More than noticing the ant, I noticed the huge piece of smashed popcorn it was carrying…dragging along.

It was over 3 times its size. And it was definitely a struggle for the little ant to move it.

He managed to drag it, pausing every so often to re-grasp it and take a break, until something unexpected started to slow him down.

Another ant had approached, and at first, seemed like it would assist in carrying the burden. It became evident, however, that it was only along for the ride.

The other ant circled the first ant a few times, then climbed on top of the piece of popcorn, and got comfy. It just sat there.

The first ant seemed rather upset. Not only was the first ant NOT helping, but it was actually making the work MORE arduous and taxing.

After trying and trying to keep going, the first ant, now unable to continue pulling the weight of the popcorn, suddenly gave up. It walked away, leaving the popcorn and the comfortable ant behind.

Obviously, at this point, I was totally absorbed in the whole scenario. “Come on, little ant! Don’t give up just because it seems impossible!”

As if it heard the encouraging thought in my head, the ant suddenly switched directions and marched back to the piece of popcorn. Something must have gone on between it and the lazy ant, because the lazy ant got off and walked away. And the other ant continued the difficult labor he had earlier begun.

As insignificant of an event as it might seem, that little ant taught me the lesson of being willing to persevere for what’s important.

At times it can feel the weight of the world is on our shoulders, and it’s hard to continue doing what we need to do…even without added difficulty or opposition.

Whatever that “piece of popcorn” is in your life today, don’t give up. Keep going back; keep your goal in mind; keep your heart from dismay and discouragement.

You won’t regret it.