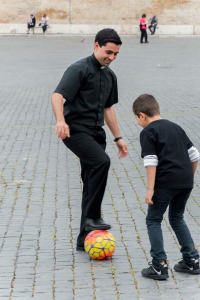 Here’s LC Cheshire Alum Br Gustavo evangelizing in Rome between classes. Back in Mexico he was preparing to play professional soccer. But when God called, he responded generously. Now he is using his talents to share the joy of friendship with Jesus and recruit many to play on Jesus’ team!

Today ask God what he would like you to do today, something small or something big.