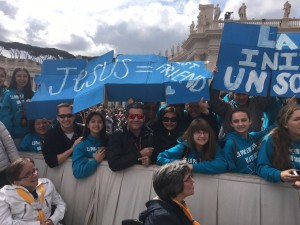 Seventeen 8th graders from Houston, Texas were intent on sparking a fire of enthusiasm for Christ, the Pope, and the Church. And they weren’t alone.

The Northwoods Catholic School students and families on pilgrimage in Rome were joined by over 100,000 other people, mostly teens age 12-16, at the Mass at St. Peters during the weekend Holy Year of Mercy Jubilee for Youth.

Groggy but excited, 6am they jumped on the train to get a first spot in line for when security opened at 8am for the 10am mass. ECyD members from Chile and Spain were already there. 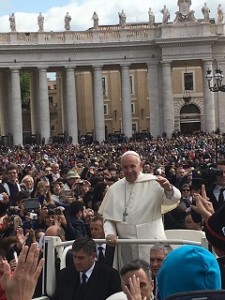 Both Sunday for the Jubilee and Wednesday for the audience, they cheered, sang, and shouted for Christ, the Pope, and ECyD, getting pilgrims from all parts of the world standing and sitting around them to join in.

“La pace inizia con un sorriso” was their class motto: “Peace begins with a smile” (Mother Teresa). There was a trickle effect from them chanting those words, over and over, waiting for Pope Francis;  hope and enthusiasm spread among the people around them, who were amazed at their spunk and endurance.

Although they didn’t get the Pope to stop in front of them as he drove by in his pope mobile, as they so ardently desired, they left both events with hearts even more on fire, having spread the flame with those around them.