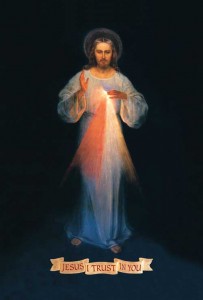 Please pray for Ashley. She is three years old and has cancer. On Saturday, April 2, we did street missions and a vigil of adoration to prepare Rome for Divine Mercy Sunday. As the crowds filed mechanically by the plaza of the tiny Church of St Barbara, tucked in among Roman restaurants and classy clothing stores, I found myself face to face with a woman and her five-year old girl. They were Ashley’s mom and sister. I asked them if they had any prayer intentions they wanted me to bring before the Blessed Sacrament on this eve of Divine Mercy Sunday. “Please pray for my daughter, Ashley. She’s three and a half, has cancer, and is getting baptized tomorrow.” We entered the Church and prayed and cried for Ashley before the Throne of Christ’s Mercy as Christ himself called the Eucharist when he spoke to St Faustina Kowalska. How deep is God’s Mercy!

What joy flooded Christ’s heart to receive Ashley into himself on that day of his Mercy when she was beautifully baptized! The face of God is Mercy, as Pope Francis entitled his recent book. “Pouring out his Mercy on each and every one of us is his favorite thing to do,” the pope said in his first audience of the Jubilee year. May we never be afraid of our weakness. How would you feel if you could hold Ashley’s hand and look into her innocent eyes? That is how Jesus looks at us. When St Faustina told our Lord she was afraid of her weakness—and who can say that deep down they don’t feel the same—Christ told her: “I will never reject anyone who humbles himself. Your misery will be submerged in the abyss of my Mercy. Why do you try to argue with me about your misery? Grant my heart’s desire: give me all your sorrows and misery, and I will fill you with the treasures of my graces.” Grant my heart’s desire! Grant my heart’s desire! What a God we have whose heart’s desire is absorbing our misery, our sins, our spitting in His face, in the warm embrace of gratuitous, unmerited, unlimited, tender Mercy. It isn’t just that God puts up with and forgives our sins as we would do. His ways are so far beyond our ways. His greatest joy is filling us with his Mercy.

Just as Ashley gave him that joy on Divine Mercy Sunday, each of us can fulfill his dream today by bringing your miseries to him, but don’t stop there. We are small, and even if we feel really, really miserable, our misery is very small. Relax. We’re too small to cause God big problems. Since we and our misery are so small, how can we give him even more joy if his joy is in pouring out Mercy on our misery?

On Divine Mercy Sunday, I joined a hundred of my fellow Legionaries in giving out Communion at Pope Francis’ Mass in St Peter’s Square. In his homily, he told us that we are all called to be living gospels of Mercy, apostles of Mercy that allow Christ to break open the doors of our hearts, as John Paul II always told us, so that we can go out and bring his Mercy to the world by touching—not just addressing—touching the physical and moral wounds of our brothers and sisters.

Christ through the mouth of his vicar is calling all of us to be Christ’s Mercy for the world. Just as that image of Divine Mercy personally looks you in the eye as the rays of his heart burst out, so he is calling each of you personally through the call of Pope Francis to be a witness of his Mercy who has experienced that sweet healing embrace of his boundless Mercy in his own life and thus is overflowing with a burning flame to bring this Mercy to as many of his brothers and sisters as possible. This is how we can bring Christ even more joy than giving him our own little misery. Bring him the misery of others, or rather, bring his Mercy to their misery.

Be a witness of Mercy. Through you, let him absorb the misery of so many and fill them with His love. Touch them that Christ may touch them. That is His Heart’s desire.

3 Responses to Grant His Heart’s Desire