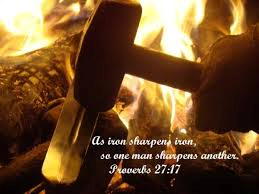 “As iron sharpens iron, so one person sharpens another.” (Proverbs 27:17)

Kenya’s  David Rudisha holds the world record for the 800 meter race , running in 1 minute, 40.91 seconds in August 9, 2012.  His incredible record pace pushed all the runners to incredible times; “With Rudisha breaking 1:41, two men under 1:42, five under 1:43, and all eight under 1:44, it was the greatest depth 800m race in history.” (IAAF- International Association of Athletes). It was the first time in the history of international 800m competition where every runner either ran a personal or season’s best.

Friends should inspire and challenge you to be better Christians, better spouses, and better professionals.  In working with men and women, I often ask, “Do your friends love their spouse?  Are your friends caught up in the material world or do they give their time, treasure and talent to help those in need? Do your friends know and love Jesus Christ, and can you talk freely about your Faith with them in a social setting?  Are your friends overindulgent with drugs, alcohol or other addictions?

During my High School and college years, I had the blessing of being a part of the Regnum Christi, a movement of apostolate connected with the Legionaries of Christ.  We had weekly meetings on Sunday evening to discuss a Gospel reading and a relevant case study that would challenge us to be better apostles and more authentic Catholics. This band of brothers held me accountable to very high moral standards, and their presence in my High School hallways, chapels and athletic fields constantly encouraged me to live excellence.   One of the members of this team, Kevin, became my roommate at Michigan State, and his impact on my soul during these formative years was massive.  He came up with the idea that we would have to pay each other $25 if we ever came back to our dorm room drunk, and he never had to pay me a penny.  He often helped me discern which girls would be appropriate to date, and we avoided those parties that were simply out of control.  He out hustled everyone in our basketball games, and he was known to look for the open man before “forcing” a shot.  He noticed when you were down, and his creative sense of humor would kick in to immediately pick you back up again.   Kevin prayed his rosary everyday (even when he came in really late, I would see him kneel on the floor and bring out the beads), he meditated on Scripture before going to bed, went to Mass every Sunday and regular Confession, and he pursued excellence in every aspect of his life, including basically straight A’s in electrical engineering.  He was my “David Rudisha”, and without a doubt, his friendship pushed me to a different level.