I can’t believe that I believe it 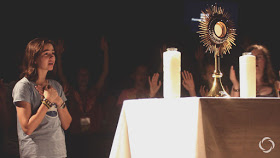 Like the great majority of homo sapiens, I easily believe what I see, and hardly believe what I don’t. Like me is dear annoying little Richard Dawkins. In a debate with Australia’s good Cardinal Pell, he said “Well, I’m sure that when you Catholics say that’s the body of Christ, you don’t REALLY mean it! It must be some sort of spiritual or symbolic meaning!”

Do we really mean it?

In short, the answer is yes.

But, how do we justify (not “prove”, not “explain”, just “justify”!) this belief? Any YouTube viewer can come up with a million apparently valid negations. Nothing changes! Molecules are the same! He died 2000 years ago!

Well, let’s see if this idea of bread and wine becoming Body and Blood, and Soul and Divinity, of Jesus contradicts or is in agreement with the big picture of the Church’s teaching. If we find a contradiction, Dawkins is correct. If we find agreement… we have proven nothing, except that Catholics are coherent in their crazy logic.

First, a simple idea. Given the following (we got to start somewhere!):

Then, of these two possible outcomes, which is the most logical?

To me, 2 makes more sense. Hence, the Eucharist.

Then, let’s tackle some simple objections.

“But he died 2000 years ago!” – Yes. And rose. Taking the teaching in its entirety, Jesus rose, but not as a ghost, he rose with his body. Boom.  We call it the glorified body. What’s it like? No idea, but judging from historical accounts when you have a glorified body you can: go through walls (Jn 20:19), disguise as a stranger (Lk 24:13), levitate upwards like Neo leaving your buddies perplexed like many Agent Smiths (Lk 24:31, Acts 1:6), and eat fish (Lk 24:42). What if you don’t like fish? You probably have glorified taste buds that can change that.

Likely, the glorified body does not age!

“But that would be cannibalism!” – Nope, cannibalism is eating a dead corpse. Christ is alive in his glorified body.

“But that’s impossible!” – Is it? Consider this – what happens when you eat? You intake organic matter, this gets broken down in processes described in chemistry, and, after discarding the garbage, you retain nutrients (useful molecules) and energy (stored in molecules such as ATP). Some of those nutrients then go and build some parts of your body: bones, muscle, fat (plenty of that). Guess what, they stay there for a long time! Is your biceps a part of your body? Well, it once was a chunk of another animal, likely a cow! Is your belly flab part of your body? Of course not! That’s  just a temporary guest.

Seriously, we turn bread and wine in our bodies all the time! And I’m Italian, so I probably do it more than most of you. Why would we be surprised if the Almighty does it on a larger scale?

“But nothing changes!” – No chemical or physical reactions, to be precise.  But back to the elementary particle example above, nothing happens to the neutrons you ingest in that cappuccino. Seriously, they are exactly the same, yet they become your body.

“But the Church invented that later!” – Nope, study your history. It was exceedingly clear to the first Christians that the Eucharist was not a symbol. Here is a collection from a dozen scripts of the first centuries which confirm it.

Of course this rambling is no proof – it’s just me saying: I can’t believe that I actually believe it, but I do.

Stefano was born in Germany, his family moved around, and finally settled back in Rome (Italy!) where he did high school and his Physics undergrad. In those years he became very involved in the RC section, and especially enjoyed carrying out summer Mission Youth missions in central Mexico. After falling head over heels for a beautiful Canadian, he is now cold but happy in Canada, completed his PhD in Radiation Oncology Physics, married and father to 3, the oldest being …3!
View all posts by Stefano Peca →
This entry was posted in RC Live and tagged Eucharist. Bookmark the permalink.