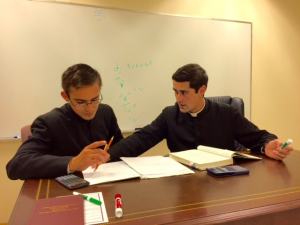 “A good leader is one who is capable of bringing up other leaders. If a leader wants to lead alone, he is a tyrant. True leadership is fruitful. Each one of you has the seed of leadership.” – Pope Francis

Photo: Br. Junior (right) takes the time to help Br. Tomás with his physics problems. It’s great to see how the brothers do their best to ensure that everyone succeeds. This requires patience and selflessness, but the reward is a stronger community and, ultimately, priests who are better formed to form others.

Who could you help today to improve themselves?