End of the world? 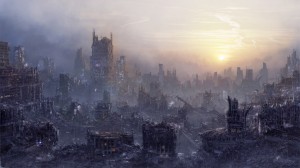 So am I the only one who keeps thinking about “the signs of the times” lately?  Let’s just take a look at some very recent events:

Is God trying to tell us something?  Is it “the end of the world” finally here?

We heard it plenty of times before Y2K (how many of you still have cans & water in your basement?)  Now it’s coming up again.  So it set me pondering: What should our reaction be when world events take on an apocalyptic hue?

A few things are certain.  First of all, “…you know neither the day nor the hour” (Mt 25,13).  This is always reassuring to me, because whenever anyone is “sure” they know when the world will end, I am equally sure that it will not end on that day.  Christ said so.  “The Last Judgment will come when Christ returns in glory. Only the Father knows the day and the hour; only he determines the moment of its coming.” (CCC 1040)

Another thing we can be sure of is that the end of times is something positive!  “The form of this world, distorted by sin, is passing away… God is preparing a new dwelling and a new earth in which righteousness dwells, in which happiness will fill and surpass all the desires of peace arising in the hearts of men.”  (Gaudium et Spes 39). Now doesn’t that sound great?  The entire universe is going to be renewed – the world will actually be that “better place” we are working toward right now.

Finally, we know what is expected of us: “Watch.”  Precisely because we know not the day nor the hour, we are urged by Christ to be in a state of constant anticipation and preparation.  Lent is the perfect time to remember this – I am called to convert my heart.  Every day.  Because Christ always stands at the door and knocks.

“Far from diminishing our concern to develop this earth, the expectancy of a new earth should spur us on, for it is here that the body of a new human family grows, foreshadowing in some way the age which is to come.” (Gaudium et Spes, 39)

Is it indeed “The end of the world as we know it?”  Yes, every day our world continues on its journey towards the final establishment of Christ’s Kingdom.  Let us not lose heart!  No.  Let us rather take courage and joyfully rally at the cry of Our Lord who waits on the threshold of hope.

Nancy Nohrden has been consecrated in Regnum Christi since 1998. Her ministry with families and youth has brought her to Rhode Island, Germany, and St. Louis. She studied philosophy at the Franciscan University of Steubenville, and is currently working towards a Master’s Degree in Communication at Spring Arbor University. She is territorial director for the consecrated women in North America.
View all posts by Nancy Nohrden →
This entry was posted in RC Live. Bookmark the permalink.