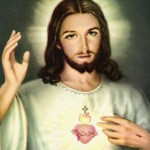 ‘I can hardly express my joy at seeing the increase of devotion to the Sacred Heart of my Saviour. I seem to live for that alone. Sometimes such an ardent desire to make It reign in all hearts is kindled within me that there is nothing I would not do and suffer to bring this about.’ (St. Margaret Mary Alacoque)

While on vacation, I had 2 random encounters with fallen away Catholics. One middle age man told me, “Father, I was raised a Roman Catholic…I was an altar boy for 6 years in a Catholic grade school, the whole 9 yards.” Then, I asked “what about now?”  He responded, “It has been awhile Father; not sure what happened.”   Later, a young lady told me “I was raised Catholic, and my parents go to Mass every week.” Then, I asked “what about you?”  She responded, “I only go to Mass when I visit home…I noticed a Catholic school in this town, but I am not sure where the Church is.  I really don’t go, but I still have faith.”  I was able to plant a few seeds, and hopefully they will both get back on board soon, but there are so many out there!  Please reach out to your friends who have wandered from the Catholic Faith…Christ wants to reign in their hearts, and sometimes it doesn’t take much!