52 Dresses: The Heart of a Woman as Seen by God 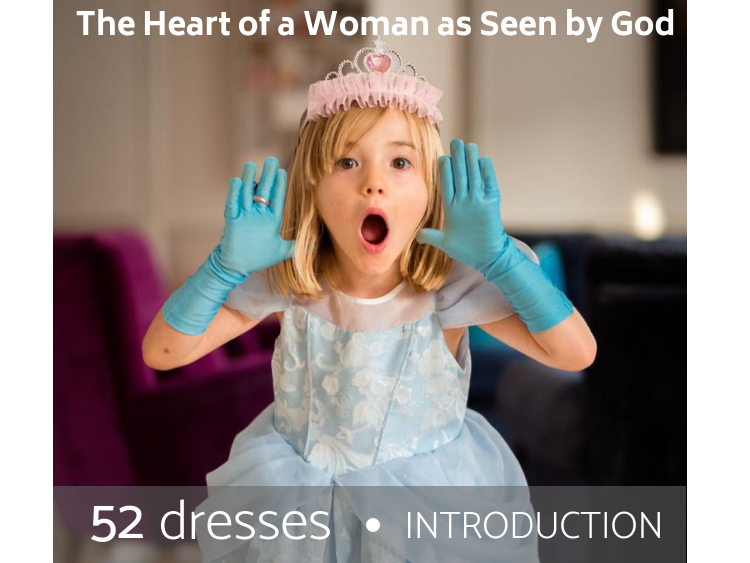 This summer I had the chance to visit my family and spend some time with my nieces.  Being with them has taught me a lot. One thing I noticed was that even though they are very young, only two and five years old, dresses are very important to them.

I was amazed, for example, by the excitement of my older niece when she dressed up as a princess. Her delight was so intense that she wanted to sleep with her princess dress on, as though if she took it off, the magic of being a princess would disappear. For her, despite her young age, wearing the dress and being a princess were one and the same. There was a complete identification. Dressing up as a princess transformed her into that character. The dress opened the door to a world that was magical but real, where she felt like she was the heroine.

I saw this truth again when my youngest niece, who is a little more than two years old, began to complain one morning, mildly at first, but more intensely as time went on, because she was determined to put on the dress that she liked, and not the one that my sister had ready for her to wear. In my innocence, I thought, “How it is possible that a girl so young can know which dress she likes and which she does not?”

Through these experiences, I discovered something about the magical world of women, where a dress is more than just a piece of clothing. Dresses are like windows into their dreams, to the point that they can come to identify themselves with them.

One day, while I was in the midst of other projects, the thought occurred to me to write some reflections on the heart of a woman – a heart that appears at the center of the lives of all human beings. Our first contact with the world is through the heart of a woman, our mother. We know its beats, its rhythms, its worries, and its dreams.  This project is a tribute to those hearts that have taught us to love since the very beginning of our existence.

Putting these two experiences together, the idea came to me to me to write a collection of reflections on the heart of a woman as seen through different kinds of dresses, reflections from God’s perspective, about how He loves, seeks, and desires the happiness of heart of all women.

The dresses that I will present in each meditation are the gifts that God wants to give to every woman, expanding her wardrobe, which is so often limited by the world and its demands.  They are spiritual and symbolic dresses; for example, a sundress, a princess’ dress, an explorer’s dress, a rainbow dress, a dress of silence, etc…, dresses that dignify and celebrate the heart of a woman.  These dresses become more than just clothing: they become gifts from God.  But they also become challenges to undertake. It requires humility to accept them, to wear them, and to integrate them with everything that already exists in her heart.

The meditations will be posted weekly, every Wednesday.

I hope you are ready for this project.  The first chapter will be next Wednesday and others will follow weekly until we complete the 52 dresses, corresponding to the 52 weeks in a year. I welcome your comments at saldetucielo@gmail.com .

The meditations are also available in Spanish on my YouTube channel: P. Guillermo Serra, L.C.

Fr. Guillermo Serra, LC, was born in Madrid, Spain, and now lives in Mexico City. Since his ordination in 2004, he has been leading people to know and embrace Christ’s love, learn to go deeper in prayer, and recognize God’s presence in their lives. A well-known writer and speaker, Fr. Guillermo has published two books on prayer, Sal de tu Cielo and Jesús a mi Alma. He is also one of the most followed priests worldwide in his vibrant social media ministry, through which he seeks to introduce people all over the world to Jesus Christ. He has worked in Italy and the United States, and is currently serving as Director of Formation at a school in Mexico City.
View all posts by Fr. Guillermo Serra, LC →
This entry was posted in RC Live. Bookmark the permalink.

One Response to 52 Dresses: The Heart of a Woman as Seen by God