The Wounded Bride and the Word of God

Angry, heart-broken and sickened over the Pennsylvania Grand Jury Report, I have been fairly speechless since the news broke.

I have read the first 50 pages of the report, and I felt like I was punched in the gut by the graphic descriptions of the evil it uncovered. After prayer and reflection, I intend to continue reading the rest of the report. Why?  Because the victims were brave enough to speak, and I feel that as someone who works in the Catholic Church, I should be brave enough to listen to them.  And because if we fall to the more comfortable option of listening to internet commentators instead of the voices contained in the report itself, the truth they speak could be lost in a sea of voices.

What the victims and the Grand Jury have said is powerful, like the voices of prophets. These are ordinary people who received an extraordinary call to responsibility- some, simply by being called for jury duty, some by the wounds inflicted on them. They have been prophets, like Jonah and Ezekiel, at a time when we needed them to show us a hidden and horrible evil that exists in our Church.  They are heroes who had the courage to speak truth to power, a power that had tried to degrade and silence them. If I was the pope (which I am not and do not want to be), I would invite them to the Vatican, thank them, and call a synod of bishops to listen to them.  Their words are the ones that matter.

Because of their courage, this week at least 5 other Grand Jurys are being called for in other states.

Instead of speaking, I have felt a need to listen — to God, to those who have spoken out, and to those who are in positions to begin to correct this.  Anything I felt like saying seemed trite before the magnitude of the trauma and the need for purification before us.  Any words that have come to my mind have been stopped by my heart before they have been spoken, and substituted spontaneously with a simple plea, “My Jesus, have mercy on us.”

However, the internet is making up for any muteness of mine with a deluge of commentary.  I praise God for that, because the ‘righteous anger’ that Philadelphia’s Archbishop Chaput talked about in his column this week is present in the body of Christ in a way that is impossible to ignore.

While some have been (justifiably) taken to task over responses that are too corporate or that beg us to believe their naïve lack of knowledge about the hideous things that happened to those under their responsibility, others have given me, and many others, a glimpse of hope in utter darkness.

My profoundest consolation this past week has been in the Mass, and in the closeness of Mary,  the Mother of the Church, the Un-doer of Knots, the Queen of Heaven.

This year’s solemnity of the Assumption, the day after the report was released, felt much more like the feast of Our Lady of Sorrows, but what a gift that Mary was with us. What a gift that it was a Holy Day of Obligation, when the entire church is obliged to attend Mass, to be the Body of Christ united in prayer with her, and to receive the Body of Christ at a time when we don’t have the power to even rise from our knees without it. 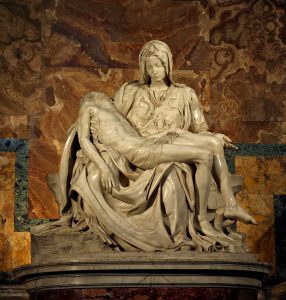 Michelangelo’s Pieta. This week she has been holding us, the wounded Church, her Son’s Bride, as she held her Son.

This week’s readings are directed at us like a laser – they are words for exactly this moment in time, especially the first readings.  I beg you to read them- particularly the first readings from the Solemnity of the Queenship of Mary and the day following.  God has obviously not abandoned his broken bride in her pain and confusion.

First Reading from the Feast of the Queenship of Mary, August 22, 2018

The word of the Lord came to me:
Son of man, prophesy against the shepherds of Israel,
in these words prophesy to them to the shepherds:
Thus says the Lord GOD: Woe to the shepherds of Israel
who have been pasturing themselves!
Should not shepherds, rather, pasture sheep?
You have fed off their milk, worn their wool,
and slaughtered the fatlings,
but the sheep you have not pastured.
You did not strengthen the weak nor heal the sick
nor bind up the injured.
You did not bring back the strayed nor seek the lost,
but you lorded it over them harshly and brutally.
So they were scattered for the lack of a shepherd,
and became food for all the wild beasts.
My sheep were scattered
and wandered over all the mountains and high hills;
my sheep were scattered over the whole earth,
with no one to look after them or to search for them.

Therefore, shepherds, hear the word of the LORD:
As I live, says the Lord GOD,
because my sheep have been given over to pillage,
and because my sheep have become food for every wild beast,
for lack of a shepherd;
because my shepherds did not look after my sheep,
but pastured themselves and did not pasture my sheep;
because of this, shepherds, hear the word of the LORD:
Thus says the Lord GOD:
I swear I am coming against these shepherds.
I will claim my sheep from them
and put a stop to their shepherding my sheep
so that they may no longer pasture themselves.
I will save my sheep,
that they may no longer be food for their mouths.

For thus says the Lord GOD:
I myself will look after and tend my sheep.

That was from yesterday. Today, just before daily Mass, I was asked to do the readings. I should have pre-read them before approaching the lecturn so I could emotionally prepare myself.

Standing and proclaiming the Word of God, I was shook.

Instead of professionally distancing myself from the intensity of what God was saying to us through these words in order to be able to read them clearly and calmly, I couldn’t help praying what I was speaking, and really being rendered speechless again.  I made it through the readings, but with a choke in my voice with tears in my eyes. Awkward, but oh well.

The Word of God spoke unmistakably. In every Catholic Church around the world. On a personal note, the Word of God spoke when I had no words.  And in that strange kind of paradox that God is so good at, at Mass today he spoke through my mouth as I read the first readings. I had relevant words for the first time this week – they were his.

Take some time to pray with these readings, grieve with your Father, and dare to hope in his promises. Don’t be afraid to be shook by them like I was. Our Church needs to be shook right now. All of us.

I will prove the holiness of my great name,
profaned among the nations,
in whose midst you have profaned it.
Thus the nations shall know that I am the LORD, says the Lord GOD,
when in their sight I prove my holiness through you.
For I will take you away from among the nations,
gather you from all the foreign lands,
and bring you back to your own land.
I will sprinkle clean water upon you
to cleanse you from all your impurities,
and from all your idols I will cleanse you.
I will give you a new heart and place a new spirit within you,
taking from your bodies your stony hearts
and giving you natural hearts.
I will put my spirit within you and make you live by my statutes,
careful to observe my decrees.
You shall live in the land I gave your ancestors;
you shall be my people, and I will be your God.

Not only has God not abandoned us, but in these readings he lifts our eyes into His gaze and firmly promises the care, cleansing and healing only he can give.

I have nothing exceptional to add to the discussion, but I firmly believe that we need to keep listening, and then to paraphrase the words of Our Lady, “Do whatever He tells us to.”

There are many (thank you, God) voices of lay people, priests and bishops who have publicly and privately shared their own shock, disgust, grief and resolution to live a life worthy of their call, including many of those who are my friends on social media.

To the priests who are speaking out candidly about their pain, the shame they are faced with and their resolution to prevent these atrocities, I say thank you. I can’t tell you how much we need our priests to grieve with us, to be willing to carry the shame and pain of the Church as Alter Christus, as true fathers.  To be very close to us.  To be holy. You all have my prayers, please keep speaking the truth.

Here are some other voices whose words I have found worth listening to.

Archbishop Charles Chaput’s column: On Anger, Grief, and the Future

Bishop Robert Morlino to his diocese of Madison, WI,

Pope Francis’ Letter to the People of God,

Let’s pray and fast for the healing for all victims of sexual assault by clergy, and in reparation for the terrible sins committed. Let’s beg God for his mercy and for the fulfillment of the promises he made in the Mass today.

Many words for one who said she had none… I’ve said enough. Let’s pray and follow God as we move forward to heal our Church.