Living the Beatitudes at Home Part 5: Holiness through the Teenage Years 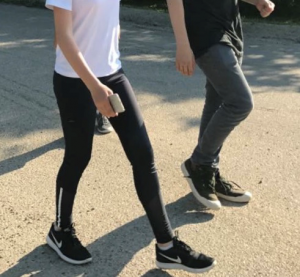 We have three teenagers in our family right now. This was something I swore would never happen; having been an irritable and defiant teenager myself, I’d always asserted, half-seriously, that I would somehow find a way to have my children skip adolescence altogether and go straight from childhood to adulthood. Instead, I find myself with three teens all at varying degrees of puberty, moodiness, and boundary-testing. I’ve heard not all teenagers go through periods of rebellion, that not all teenage girls get irritable and prickly, and that not all teenage boys do really dumb things. I have friends tell me that they “must have gotten lucky” because their children seemed to have breezed through the high school years with rational decision-making, optimistic enthusiasm, and only positive influences as friends. But for our family of children ages 8-16, just at the cusp of a period when adolescents have become the majority in our home, the journey into teenagehood has been wobbly. Despite the hours of family prayer, the countless rosaries said for and with them, the nightly read-alouds about the saints, the holy hours, and the prayers, prayers, and more prayers, they still have moments when they defy, disobey, and — to be totally honest – disappoint. Even though I feel like I’ve done all that I can to set them on a straight course along the Way of Perfection, they trip, they stumble, they stop, and sometimes even veer right off course.

Blessed are the merciful, for they will receive mercy.

As a mother, it’s disheartening to watch my teenagers stumble on their journey to holiness; as a former teenager who was particularly prone to “stumbling”, it’s even more so. Perhaps it is my memory of my own adolescence, during which I was neither a model Christian nor dutiful daughter, that makes me particularly scrupulous about my own teenagers’ behavior. Knowing how rotten I was, I want so much more for them, expect so much more from them, and am continually frustrated when they fail to live up to the high hopes and expectations I have for them. I’m expecting near-perfection, and am repeatedly disappointed when they are far less than perfect.

Pope Francis reminds us in Gaudete et Exsultate as he speaks about the fifth beatitude, that we were all failures once: “We are an army of the forgiven.” Being merciful means acknowledging this, and sometimes giving people the time and space to make mistakes, to fail, to fall, to be forgiven. Mercy calls me to accept the uncomfortable reality that on the path to joining the “army of the forgiven”, my teenage children will make mistakes. The mother in me prays they will be small.

One Response to Living the Beatitudes at Home Part 5: Holiness through the Teenage Years