Julia Child, Five-Alarm Chicken, and the Humility to Be Just Ok 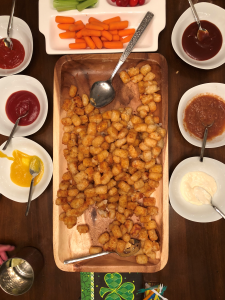 When I host a dinner party now… I serve tater tots!

I am not a good cook. Raw meat makes me squeamish and I panic when there are too many things boiling and steaming and sizzling on the stove all at once. I lack the gift and skill to know how to balance flavours or thicken a sauce. And this used to really bother me.

In fact, this used to be the start of most arguments between my husband and me. As the primary caregiver of our children and the stay-at-home parent, I felt like it was my job to make perfectly tasty, healthy, and budget-wise meals from scratch every night (all while caring for four kids only five years apart in age). The problem was, I was terrible at it. Nearly every evening, my husband, Jamie, would come home to his tearful wife juggling what felt like a thousand pots and pans at the stove, trying desperately not to burn the sauce while the noodles were already ruthlessly overcooked, or pulling a pan of blackened bread from the oven while an accusing timer reminded me of yet another failed dish that needed my immediate attention.

And nearly every evening, my husband would do the unthinkable: he would offer to help. This would send me into waves of tears: I interpreted his kind offer of assistance and his patient advice (he’s a very good cook and could usually quite easily fix whatever meal I’d botched) as criticism of my cooking abilities and, ultimately, my worth as a wife and mother. We restaged this dramatic scene almost every night: me cooking myself into a panic attack, my husband’s loving and tentative attempts to help, me bursting into tears. Repeat.

In the midst of this ongoing drama, I read My Life in France, the memoir of Julia Child. This celebrated chef, credited with introducing the American public to French cuisine, was already 36 years old (the same age as I was at the time!) when she learned to cook. If Julia Child could start cooking in her mid-30s and go on to become a famous chef, there was hope for me yet!

I don’t remember which of her recipes I was attempting to make that set off our smoke detector, but I do know that I was too busy trying to put out the fire that I didn’t hear the call from the alarm company checking to see if everything was all right. What I did hear were the sirens starting up at the fire station about six blocks directly north of us, getting louder and louder as they neared our house. I was mortified. Not only was my husband going to come home to the usual kitchen fiasco, now he would also find a fire truck and crew on the front lawn. I threw open the front door and tried to shoo the firefighters away, explaining I’d just had a little trouble with supper and needed them to leave before my husband got home from work within the next ten minutes. They insisted on coming in and making sure there was no further emergency before I finally convinced them to go, though not before the neighbours had started to trickle out of their own houses to investigate the spectacle. The truck pulled away minutes before my husband arrived home from work, and I would have got away with the whole thing if it weren’t for a charred ruin of a chicken and a five-year-old boy who greeted him at the door with a wide-eyed expression and cried “A fire truck was here!”

Since then, I’ve learned how to prepare meals for my family that doesn’t result in first responders banging down my door. Working within my culinary limitations, the meals I make are usually not very elaborate, and rarely from scratch. Tonight while I was making supper (frozen meatballs in the slow cooker), I realized there wasn’t enough sauce, and my first thought was “It’s ok, Jamie will fix it when he gets home.” I’ve learned that I don’t have to be great at everything or have to do it all myself, and that asking for – and needing – help is not a sign of my lack of worth.

Sometimes when I hear people reminisce about their mother or grandmother’s cooking, it makes me feel a bit rueful, and I wonder what my children will say about me. That I kept them fed, that I’d mastered the three-ingredient slow-cooker meal, and that I never once burned the house down is good enough for me.