The Blood of Horses and Men 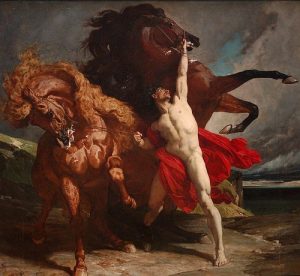 Automedon with the Horses of Achilles by Henri Renault

“What he loved in horses was what he loved in men, the blood and the heat of the blood that ran them. All his reverence and all his fondness and all the leanings of his life were for the ardent-hearted and they would always be so and never be otherwise.” ― Cormac McCarthy, All the Pretty Horses

Henri Renault’s painting of Automedon with the Horses of Achilles brought to mind a book I have recently read about ardent-hearted horses and ardent-hearted men and these men’s relationship to nature. In All the Pretty Horses, Cormac McCarthy presents John Grady Cole, the last heir in a long line of Texan cowboys. As a youth, he escapes the comforts and cares of his more “civilized” mother in search of wilderness and adventure. He and his horse ride through the vast deserts and rocky mountains of northern Mexico searching for destiny. John Grady believes his fate is tied to working the earth and tending the cattle and, most importantly, breaking and riding horses.  He claims to be able to establish a deep relationship with the beast that runs under him.

I had heard of the deep bond that can be shared with horses long before I chanced upon the story of John Grady Cole. My father often liked recounting the stories of his youth spent among horses. He knew his horses and his horses knew him. This bond was a way to connect with nature, to feel part of creation. A relationship was created by the fact that a living being stronger and more energetic than you could somehow be made to serve your needs and in return, you now had to take care of that creature. It was a relationship as if with nature itself.  My father told me once, “You can love a horse, but you have to fear it as well.” The same goes for nature.

This painting speaks to me of power, of wild and untamed nature and of man’s relationship to the raw energy of life. The darkened clouds of tempest begin to shadow the land, the mighty sea is glimpsed in the background, the ground where Automedon stands is rock-solid and bare, but, most strikingly, the horses stand in the foreground muscular and huge. They are contorted, straining every muscle, frothing at the mouth from the effort. In the center, holding everything together is Automedon, strong and elegant, harnessing the powers of nature with a blood-red cloth about him. Admiration and fear of Xanthos and Balios (the name of the horses according to Homer) are mixed in his expression. He can sense the danger, the fact that these beasts are far stronger than he is. In his eyes, we sense a certain terror. However, there is also admiration, trust, and love in that gaze of the one who knows these horses well. He knows they will not spurn the hand that fed them and stroked their manes.

Proof for the relationship between man and horse represented in this painting comes from the source from which it was inspired: The Iliad. In it, we learn about the horses’ reticence in taking Achilles to his death (Cf. Iliad 19.392 ff.). It is love for the one whom they carry that makes them weep when Patroklos is killed off their very backs (Cf. Iliad 17.426 ff.). These two horses are children of the wind and immortal, yet they are made to run beside the mortals. Instead of this being below them, they learn to love whom they carry.

In classical lore, we find that Neoptolemos –the son of Achilles– also rode the horses of his father echoing the same relationship between man and horse. Quintus Smyrnaeus says in his Fall of Troy, “Straightway he [Neaptolemos] hearkened [to the midst of the battle], and scourged the steeds immortal on to that wild fray. Bearing their lord they flew swiftly o’er battle-highways paved with death.” In these mythological horses, we can glimpse “immortal” nature (although nature is not immortal, it sure will outlive man) being held and dominated by man.

Nature is held in the reins of man for as long as he lives.