Celebrating Easter When You Failed at Lent 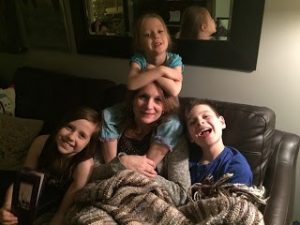 What is the solution when three kids want to sit beside Mom during prayer time, but she only has two sides? Why this of course.

I have a bad habit of evaluating my Lenten performance. “I had a good Lent” means I faithfully stuck to my Lenten promise without forgetting or “cheating”, I kept my family on track with a concrete goal, I got them to at least one Stations of the Cross, I said my prayers consistently. If I can do these few things well, according to the Lenten rubric in my head, I get an A+. And bonus points to me if I even managed to stay calm a few times as I tried to corral five kids (including two high-schoolers) to the living room for prayer time, while the three youngest fought over who got to sit beside me/read the prayer/hold the book/blow out the candle/anything else they could think of to argue about.

So what happens when Lent doesn’t go as well as I had hoped? This year, the book on St. Pius X that I bought to read aloud to the kids at bedtime still lies untouched on the coffee table, the spine not even cracked. Another year, three-quarters of the way through Lent, one of the kids asked me: “What are we doing for Lent again this year?” Most years, by the time we’re three days into the Divine Mercy novena, we’ve already missed two days. My self-evaluation can be harsh. My Lenten sacrifice wasn’t hard enough. I wasn’t faithful enough to prayer. I made too many excuses and gave myself too many dispensations to not stick to my Lenten promise. I ate all the chocolate. It’s these times when I feel like I’ve failed at Lent. And I give myself an F.

The problem with this attitude of whether or not I performed well during Lent is that it relies entirely on my effort. I did Lent well. I was faithful, I prayed, I led my family. Sitting in mass one Easter Sunday (not coincidentally during the Year of Mercy), while I berated myself for my poor Lenten performance that year, I realized that God’s Pascal mercy thankfully doesn’t rely on my performance, my effort, my striving to “do Lent well”, to get an A, but only on my receptivity to His grace. I realized that even if I struggled during Lent, that if for 40 days I floundered and flailed, and especially if I failed, that it was ok. I didn’t have to win God’s mercy by performing well during Lent, I only had to admit that it’s not up to me to earn it, and accept it anyway, even though I don’t deserve it.

Easter isn’t for those who scored high marks and had a perfect Lenten performance, nor is God’s mercy. It’s for those of us who failed but beg for mercy anyways. Thank God.

One Response to Celebrating Easter When You Failed at Lent