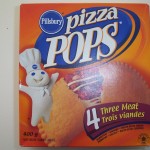 Before I joined the Legion, one of my favorite lunches was Pillsbury Pizza Pops. They were the best: two minutes in the microwave, two bites of Pizza goodness and a second or third one for good measure. Talking to some Americans, I discovered Pizza Pops, and the competition McCain Pizza Pockets, only exist in Canada so let me describe one. The closest thing I can relate it to is a Hot Pocket or a microwavable burrito; it consists of about a quarter pound of meat, cheese, pizza sauce, and a folded over and sealed pizza shell (another possible description is a microwaveable calzone).

One day, I was eating one in the chaplain’s lounge at the University of Calgary when one of my friends came in and told me that it was good I was considering the Legion because they would teach me how to eat with manners. I thought that there was nothing wrong – you are supposed to eat these with your hands – totally oblivious to the fact that eating a fist-sized item in two bites would not qualify as manners.

After these years in the Legion, I realize my friend was right on the ball. I have learned that if I am going to be another Christ as a Priest, I need to reflect Christ in all aspects: even the most superficial like eating.

Since no one person can reflect Christ fully, each one needs to reflect a part and as Legionaries we focus on Christ’s dignity. We try to show this in how we dress, play, eat, and deal with others. I still eat bites that are a little big at times but I have definitely improved by leaps and bounds. Do you have a story to share about how the Movement or the Legion made a dramatic impact on your human formation?