Ravioli — The Next Generation 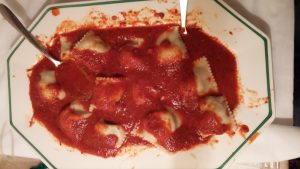 The moment had been creeping up on me for more than a quarter-century, but I didn’t see it coming.

Not the time. Not the place. Not the circumstances.

I sat in my kitchen, just a couple days past Christmas 2017. Four other people bustled about the kitchen rolling dough into pasta, mixing cheese and spices, putting together dozens and dozens of ravioli made from scratch. The task required patience and attention to detail and the love of good cooking I recall from my grandma’s kitchen and the kitchen of my wife’s grandmother.

Two other people shared the kitchen with us: my daughter’s three-month-old twin daughters.  They weren’t much help with the actual making of the ravioli, but I expect they will be someday.

An aside: I never have learned the ravioli part of marrying into a large Italian family, but I learned how to make pizza dough from my wife’s grandmother and I’m pretty good at it (for a non-Italian).

But as you might expect, this isn’t really about making ravioli or pizza, but a generational changing of the guard. A few years ago, my wife and her mom would make the ravioli…now it is my daughter.

It seems like only yesterday that my wife and I were young marrieds heading off to Christmas Eve dinner at her grandma’s house.  This year, we went to my daughter’s house. The menu featured the same pasta with sauce made from garlic and oil.  Just like grandma made – really.

As I sat in the kitchen watching the ravioli parade forming, I found my mind bouncing from various times and places.  The times and places blended together and told me that despite all the squabbles and sacrifices, family topped everything else.

I was a young man at my wife’s grandma’s house for the holidays.  I was a little boy waiting for Christmas morning.  I was a young father wrapping presents for my children and getting ready for midnight Mass. I was in Ohio, New Jersey, Illinois, and Indiana, all the places the family had at some point called home.

My grandma’s cookies were glorious and her mashed potatoes never had lumps.  Same with my mom.

Now, home and family were these wonderful young people making food in our kitchen. Their laughter, joking, sharing, coaching, and teasing were beautiful to observe.  Maybe this was the moment my life was prepared to receive.