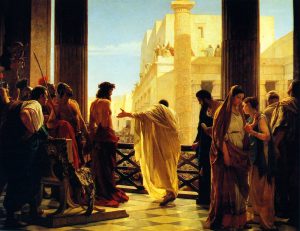 Pilate asked the question.  Christ was the answer.  He still is.  And as it has been for more than 2000 years, some find the answer and many do not.

In daily life, I have always believed that truth was a beautiful combination of faith, hope, love and doing the next right thing.  The next right thing is what is honest and in many cases – simply what must be done.

I guess I’m pretty much a black-and-white kind of guy.  If everyone followed the Golden Rule and the 10 Commandments, the world would be a caring, safe place.

We live under a democratic form of government.  For such a government to work, people need common values and a common sense of right and wrong.  People have to agree on truth.

Agreement eludes us.  We find exceptions to each of the 10 Commandments.  Certainly, the law against murder shouldn’t apply to an unborn child or an elderly person not enjoying a proper quality of life.  Certainly, the law against adultery shouldn’t apply when your spouse gains 40 pounds or suffers a disabling injury.  The government isn’t really stealing when it raises your taxes or takes your property for its own purposes.

And what of lying?  It seems that lying is acceptable if you get away with it – or it supports a “greater good.”  This was the thinking behind the Hitler/Goebbels use of the “Big Lie.”  If you are going to say something untrue about your opponent, make it a whopper. People will think there is no way you would make up such a thing – and the mere scale of it requires vetting.

The news media are horrible suckers for the big lie.  So we get days or even weeks of reports that a goofy film caused the destruction of an American embassy, the Russians manipulated our election results and the Pope isn’t strongly pro-life.

We’ve slithered into a post-truth world where facts are less important than allegations, where the ends justify the means, where you say anything to further your agenda.  Reality is what works, not what is real.

Among the various professions that affect our lives, nurses and doctors poll the highest for honesty and ethical behavior.  The lowest scores go to members of congress.  Ironically, the people we trust the least will determine the future of the people we trust the most.  That’s what happens in a culture where truth has lost the power to persuade and the biggest lie carries the day.

We must do better than Pilate.