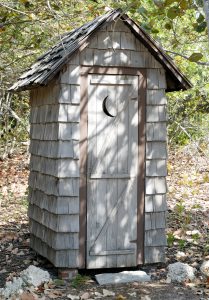 I’ve been thinking about Abraham Maslow and bathrooms of late.

Maslow didn’t have much to do with bathrooms, but I think his psychological theories might help explain huge plumbing gaps that exists in the world today.

Maslow developed the “hierarchy of needs.”  Of course, he based it on years of research and a zillion pages of analysis, but you can sum it up with a five-tiered pyramid.

At the base are basic needs, things like enough food and water to survive, simple shelter and, perhaps, the ability to outrun a tiger before it eats you.

At the peak is achieving one’s full potential and doing really creative things.  Painting the Sistine Chapel would fit here.

But it was the great bathroom gap that got me thinking about the hierarchy of needs.

In the less-developed parts of the world, folks still struggle to meet basic needs, like a place to go to the bathroom.  India is a big country with a billion or so people and a major bathroom shortage.  That means a lot of basic needs poorly met.

Something like 40 percent of Indian’s households lack a bathroom.  I’m not talking about missing out on an adjustable shower and whirlpool, I’m talking no place to conduct basic bodily elimination.  The government is working on what it calls a goal of ODF.  That means creating an “open-defecation free” society.

I’m not saying India lack advanced culture and creativity – but lots of folks are just hoping to have a better place to relieve themselves than the middle of the street or behind the nearest tree.  Bathrooms are at the base of the Maslow hierarchy and I can’t blame India to want to move up the pyramid.

Here in the USA, we’re at a different place in the hierarchy when it comes to bathrooms.  We have more than enough bathrooms to meet basic human needs.  Our bathrooms have become tools of self-expression, self-fulfillment and self-actualization.  They are the battlegrounds in the wars of gender fluidity.

Indians are hoping for something better than a hole in the ground to use as a bathroom; we’re fighting over who can use which bathroom, depending on which of the multiple genders they identify with on a particular day.

I don’t spent much time thinking about bathrooms.  I’ve always been a boy and always used the boys’ bathroom.  That makes my choices simple and I consider the bathroom to be pretty far down the pyramid in Maslow’s hierarchy.  I don’t think of a bathroom as an important expression of self.

It I ever get to the top of the pyramid, bathrooms won’t be on my mind.  But I might do a Sistine Chapel.