Emergency relief work has given me the opportunity to explore many different places and experience many different cultures. Nepal is, without a doubt, one of the most beautiful countries I have ever seen. Matching that beauty is a culture of generosity, respect and kindness. Though I have made similar statements about a number of countries and cultures, and in each case it remains true, I am humbled by the people I am so privileged to serve here in Nepal. They are a people that I deeply respect.

I first arrived to Nepal about two weeks ago. A few hours after arriving to Kathmandu, I left for Dhading Besi- the main city of Dhading district, which would become my base. Dhading district lies Northwest of Kathmandu and is one of a few districts significantly damage by the earthquake. The terrain is essentially all mountains and hills, with dangerous roads our drivers refuse to travel and foot trails not for the faint of heart. Throughout these hills and snow-capped mountains, lie villages that seem to just barely cling to the steep landscape. Homes in these villages are primarily made of stone. While picturesque, these stone homes couldn’t withstand the force of a 7.8 magnitude earthquake. In many villages, not one stone is left atop another. Help is slow in coming to these villages due to treacherous terrain and roads and foothills that have been damaged or are impassable due to landslides.

Setting up camp in the goat field

My responsibility as emergency health manager of Dhading is to oversee the function of and participate in the activities of the Dhading mobile medical unit. The mobile medical unit is comprised of nurses and doctors- mainly from the United States- and local volunteers, who function as our translators, registrars, and medical assistants. Every few days, the local District Health Officer of Dhading identifies and assigns the mobile medical unit a mountain village that has not yet received post-earthquake assistance. Once a location has been determined and supplies have been organized, our team is transported to the village by helicopter. For two days we stay in the village running health clinics, spending time assessing the level of damage caused by the earthquake, speaking to community leaders to identify needs and finding patients that may require immediate evacuation to a hospital in one of the larger cities.

The first village that I visited with the mobile medical unit was Darka, which is located north of Dhading Besi. Like so many others, Darka was completely leveled by the earthquake. The health post is completely collapsed, families are living in makeshift shelters that will not withstand the coming rains, the water pipeline was damaged and there is gang activity in the area. 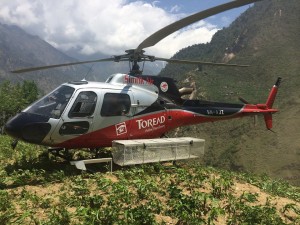 The helicopter we rent

The mobile medical unit saw and treated almost 200 patients in Darka. Of those, three were in need of evacuation. The first patient was a six-year-old girl who needed treatment for a significant burn to her arm. Though the burn had happened only five days prior, she was already losing range of motion in the affected extremity. The second and third patients were both elderly females who sustained injuries during the earthquake. One woman had an obvious wrist fracture and the other- Lalmaya- had a broken ankle or foot. Despite their injuries, both women continued caring for their families and working their fields, as their survival and the survival of their families depended on it. 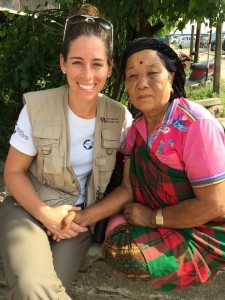 The mobile medical team loaded into the first couple of helicopter runs to return to Dhading Besi, while I stayed behind to accompany the patients in a separate helicopter run to Kathmandu. As the helicopter took off, Lalmaya began to shriek. Unable to speak the same language, all I could do was reach over my seat and hold her hand. She stopped shrieking, but maintained a tight grip on my hand the entire way to Kathmandu. After helping the patients out of the helicopter and getting them into a vehicle, I reached into my bag and pulled out my bottle of water. I handed the bottle to Lalmaya and motioned for her to take a drink and pass it the other patients. She looked at me for a moment without moving and then began to slowly shake her head. Being the most ornery of the group, I thought Lalmaya had found something I had done unsatisfactory. Instead of motioning her irritation as I expected, she dropped the water bottle onto her lap, covered her face with her hands and began to cry. After a few moments, she uncovered her face, took both of my hands into hers and began to kiss them. Then she pulled me closer and put both of her hands on my face. Though we don’t speak the same language, I know exactly what she was saying to me as she held my face close to hers and cried. I will never forget her gesture of gratitude.

This used to be this little girl's home

After taking each patient to the appropriate hospital and convincing Lalmaya to relinquish my arm so she could go to X ray and I could leave, I finally got back into the vehicle and headed back to Dhading Besi. The following day was meant to be a day off for the mobile medical unit, but the date was May 12th. Being in post earthquake Nepal, we had grown accustomed to multiple daily aftershocks and rarely even acknowledged them. As the second earthquake hit Nepal and the ground began to shake that afternoon- growing in intensity with each passing moment- everyone took notice. One of the medical staff began yelling at everyone to get out of the building, though most were already up and running. Once outside, we stopped briefly to regroup, only to find the building next door dangerously swaying back and forth. Like the rest of Dhading Besi, we joined the mass of people running and screaming through to streets until we cleared the buildings and came to an open strip of land. Then we waited.

After awhile, we headed back, only to be sent running again after a large aftershock. Two more times we went back and two more large aftershocks sent us running. All of Dhading Besi was in chaos, as much of the city packed up and headed to the hills – preferring to risk a landslide to a falling building. After the third large aftershock, we decided to leave our building as well. We packed a bag and our tents and set up camp in a goat field. At three am, a 6.1 magnitude aftershock rocked Nepal and violently woke us from sleep. It’s one thing to being be awake and upright during an earthquake or aftershock, but to being laying flat and sleeping unsuspectingly on the very ground that is angrily grinding, rumbling and shaking- it more than a little bit disorienting and frightening.

Before the second earthquake, we ignored the rumblings of a few aftershocks, now a slammed door, the noise or shaking of a large truck in the street or even any feeling of momentary imbalance causes all of us to freeze. Everyone has a go bag, carries their passport with them at all times and sleeps in something they can run through the streets in. We all have a better understanding and a deeper respect for what the people of Nepal have been through.

From the outside, relief work seems like a heroic act of selflessness, but from the inside, it seems so different. It is a privilege and a gift to be the person that gets to bring joy, hope and healing to suffering people. While it can cause my physical body fatigue and pain, at the same time, it gives my heart life, energy and purpose.

Regnum Christi member Kelly Suter is a nurse currently serving in emergency relief services in Nepal. Last year, she worked in Liberia, helping treat patients suffering from Ebola. She also has served as an RC Mission Corps missionary for two years and has participated in Mission Youth missions. Besides her work in West Africa, she has worked on relief missions in Haiti, Sudan and East Timor. Kelly was featured in several past articles on the Regnum Christi website.
View all posts by Kelly Suter →
This entry was posted in RC Live. Bookmark the permalink.

One Response to Kelly Suter: first report from Nepal