The Way of St. James 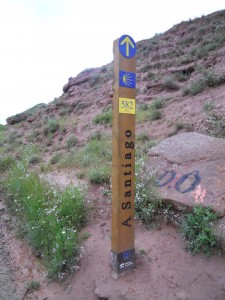 The Way of St. James, more commonly called “The Camino”, is a series of pilgrimage routes throughout Europe culminating at the purported tomb of St. James in Compostela in northwest Spain. Although it is internationally well known, the pilgrimage was most recently popularized by the movie The Way, starring Martin Sheen and one of his sons, Emilio Estevez.

You can find out more information about the Camino on the Internet. Here are a few links:

Some of our own Legionary priests have taken, or are currently taking, this pilgrimage, including Fr. Jose Felix Ortega LC and Fr. Edward Hopkins LC. Fr. Edward has been sharing blogs from his walk now in progress on Facebook:

Following is his Day 1 installment:

On Tuesday we began our (El Camino) walk in the little town of Porriño. We were surprised by so many hills, mostly “uphill,” but it was a shorter distance than days to come, so we couldn’t complain. The countryside is beautiful. We tried to stick together and stopped to pray briefly at each church or shrine on the way. At the churches and at most of the coffee shops we got our “Pilgrim credentials” stamped with their own particular emblem. But by the afternoon we had begun to spread out. Two of the group managed to wander a couple miles off course but soon found their way back. We later gave them a hard time in good spirit…

While most of the way is very well marked, there can be some spots where it is easy take the wrong route. But it is all part of trying to follow the Lord on HIS Camino.

I had a very blessed experience while walking with another pilgrim (Evelyn Auth). We just began to take a long downhill path before entering our destination town, when we saw a man leaning down from his wall above the path, his hands full of freshly picked fruit for us. He had seen us on the path, as he drove home and quickly ran out back to his orchard. He was as joyful and as welcoming as one could imagine. He obviously enjoys blessing the pilgrims who pass with his fruit. He claimed that the plums would begin to go bad in a week, so he’d rather give them away. We visited with him for about 10 minutes, as he left us to feed another group of pilgrims from Italy who also came by at the right time.

After a grateful farewell, we continued down the hill and soon bumped into a young couple from Germany, who were pushing their bikes up the path (it was that steep). The young man identified himself as without faith; their journey was “NOT” spiritual. He was doing the Camino for her (they were actually going backwards toward her grandparents place in Portugal). She admitted that while she was not really practicing, she was doing this for her grandmother who had died a year earlier, a woman who herself had done the Camino more than once. We tried to encourage them (suggesting) she was doing this for love of her grandmother so it was spiritual for her. And since he was doing it for love of this girlfriend, and love is spiritual… well, he was doing something more spiritual that he had imagined.

It is true that on the path of life, we encounter people unexpectedly, people we don’t know or would not seek out. But God puts them in our path and puts us in theirs. What a lesson on God’s constantly active Providential Plan!

After doing a spiritual reflection together after lunch, we left for where we are staying and had Mass to end the day. I celebrated for the group, but since about a dozen Spaniards joined us, it became a Spanish/English liturgy. We thanked God for the days’ blessings. And the priest who welcomed us to celebrate at his parish gave us all another stamp for our Pilgrim pass.