Courage and a “Hard Teaching”

Posted on February 4, 2013 by Kelly Luttinen 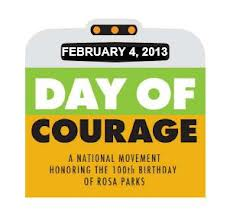 I saw on the news this morning that today, at least in the Detroit area, we are celebrating The Day of Courage in honor of the late, great civil rights leader, Rosa Parks, who refused to give up her seat on a bus to a white man during the days of segregation.  She was truly an inspiring woman, who bravely resisted the prevailing beliefs of her time.

On this Day of Courage, I would also like to honor Jesus Christ and his Church – my Church – the Catholic Church, that continues to stand against the tide of the times regarding free sexuality, contraception and abortion.  May she always be a witness to God’s truth, no matter what the fashion of the times happens to be.

For your consideration and prayer, I present a few quotes from Jesus Christ in sacred scripture, and words from Pope Benedict the 16th.

Then many of his disciples who were listening said, “This saying is hard; who can accept it?” …. As a result of this, many [of] his disciples returned to their former way of life and no longer accompanied him. Jesus then said to the Twelve, “Do you also want to leave?” Simon Peter answered him, “Master, to whom shall we go? You have the words of eternal life. (John 6:60-69)

And so I say to you, you are Peter, and upon this rock I will build my church, and the gates of the netherworld shall not prevail against it.  I will give you the keys to the kingdom of heaven. Whatever you bind on earth shall be bound in heaven; and whatever you loose on earth shall be loosed in heaven.” (Matthew 16: 18-19)

—Interview of the Holy Father in Preparation to his Apostolic Journey to Bavaria
August 5, 2006

…today we find ourselves before a separation of sexuality from procreation such as was not known earlier, and this makes it all the more necessary not to lose sight of the inner connection between the two. . . .In Brave New World… we see a vision of a coming world in which sexuality is something completely detached from procreation…children are planned and produced in a laboratory in a regulated fashion. … (and) that signals the self-destruction of man. Children become products in which we want to express ourselves; they are fully robbed in advance of their own life’s projects.  And sexuality once again becomes something replaceable….in all this the relationship of man and woman is also lost….In the question of contraception…the Church wants to keep man human. …the Church is leading a struggle for man. The point of the Church’s objections is to underscore this battle…. what is at stake are …major cardinal points of human existence. http://vita-nostra-in-ecclesia.blogspot.com/2012/02/pope-benedict-xvi-on-church-and.html