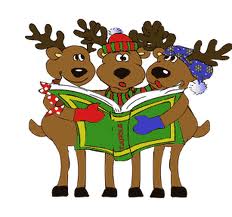 My daughter, Adrienne, has a knack for getting me to do the right thing – even when I resist.  Last week, home from college, she announced that she thought it would be a good idea for us to go Christmas caroling at a nearby convalescent home.

My wife loved the idea; I started thinking of excuses why it wasn’t a good thing.  We are really busy this time of year.  I have a cold.  We would need a bunch of people.  Nobody would show up.

In reality, I was just exhibiting shyness, laziness and a lack of charity.  But being virtually incapable of saying no to my daughter, I went along.

Tuesday evening our brave band of seven singers gathered in front of a crowd of elderly folks, many in wheelchairs and facing various categories of medical challenges.  We started singing, sounding better than I expected we would.

Soon, many in the crowd were joining in the traditional Christmas carols, laughing, clapping and coming to life in the spirit of the season.

Our little performance lasted about a half hour and we departed to much applause and shouts of “thank you, come again.”  I’m pretty sure I promised we’d do it again next year.