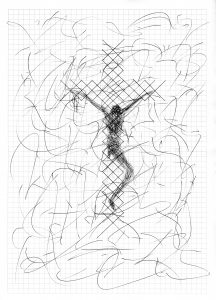 Okay, today I have a completely different reflection. I have done very little art since St Rose of Lima Elementary School. I doodle a lot but that is more for something to do and nobody would consider that art.

A little while back, I doodled something similar in the margins of a few class notes. One day after class I spent a little time drawing it a little better than a doodle. It accompanies this post. At first, I doubt you like it but just give me the chance for a quick explanation. I call it “Christ in modernity.”

Today, people try and explain Christ away or try and make new version of him, but the figure of Christ stands out all the more strongly. People try and fit Christ into a box, the cross is all rationalized away like math amid straight lines. Jesus is no longer the God to whom we surrender all but the rational result of our reasoning.

People try and make an artistic version, where Christ is no longer himself but some do-gooder who goes around without a mission, without stopping, and without reason. He is but one more flash in the pan among all the thousands of noble people who walked the planet.

However, against modernity, Christ stands out stronger.