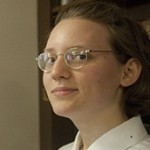 In our very secular world, Mary Anne Marks may be little more than a footnote in history.  But she now resides on my prayer list and already has been an inspiration.

Miss Marks is the 2010 Valedictorian of Harvard University.  She could go to graduate school.  She could get a job and make a pile of money.

Instead, she is going to Ann Arbor to become an aspirant among the Domincan Sisters of Mary, Mother of the Eucharist.  In other words, she is discerning whether God is calling her to be a nun.

While it isn’t unheard of for a Harvard graduate to enter religious life, it is most certainly the exception.  And I’m pretty sure it is a first for a valedictorian.

To many people, I expect her decision seems rather insane.  Many must wonder why she would give up so much.  I’m sure there also are some who admire her and wish they had the same willingness to answer a higher calling.  But what she is doing is most definitely contrary to the mainstream culture.

This isn’t the first Mary to make a choice the world might reject.  The Virgin Mary said “yes” to the mysterious task of bringing God into the world.

When sisters Martha and Mary welcomed Christ into their home, Mary made an unpopular choice feasting on the words of Our Lord while Martha toiled in the kitchen.

Thanks be to God.

One Response to A better choice